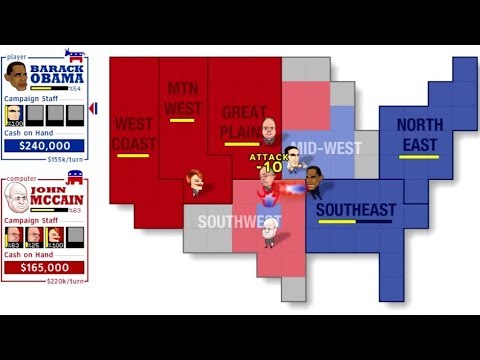 It’s election day in the U.S., and since it’s the first election I can vote in, I decided to celebrate by traveling back in time to 2008 to play an old favorite Flash game of mine: Campaign.

My brother and I played this all the time back in 2007-2008. One of our favorite parts was chatting with other players during matches because, even though it’s anonymous and about politics, the community was generally really friendly.

The game originally featured more candidates during the primaries (3 from both parties), hence “General Election Edition”, but unfortunately they were dropped afterwards and never brought back. I remember being ticked a sequel wasn’t made in 2012. 😛 Sadly the servers shut down in 2013 and Miniclip is the only site to still have it up in some form, with only single player options.

Link to the game: